Covid-19 Guidance. Here's how we're working to keep you safe.

Log in to access bookings, re-print pdf tickets, update email preferences and check out faster. Please note you may need to update your password. More information

A community powered festival bringing people together through movies and storytelling.

In September 2020, Leytonstone Loves Film returned for a second year with a reimagined programme of small-scale film screenings, online Watch Parties, talks and workshops. From 16 September to 4 October 2020, this free community-powered programme brought people together through movies and storytelling in a safe and enjoyable way while celebrating the work of local filmmakers, industry creatives and cinema enthusiasts. Discover the partners and programme.

‘There were people in their 50's and 60's in attendance, who use to be dragged to the cinema clubs by their parents but now were there with their kids‘
Hassan Vawda, Apne Cinema Club

In 2019, a new community film festival, Leytonstone Loves Film, celebrated the cinematic heritage of east London’s Leytonstone, a site of early film production. Over two days, more than 8,000 people came together for a wide range of cinematic experiences.

Featuring 130 films, the programme ranged from new releases and arthouse cinema to family films and locally made work. Some were shown in cinemas while others were screened in places you wouldn’t necessarily expect, including a local church, a carpark and a pub. The entire programme was free and films were accompanied by workshops as well as other activities.

Brought to you by a growing collective of local filmmakers, film exhibitors and film enthusiasts, more than 30 local programming partners have contributed to Leytonstone Loves Film since it began, including E17 films; We Are Parable; Women Over Fifty Film Festival Forest Film Club, Apne Film Club, Leytonstone Pop Up Film Club, Last Frame Film Club and more. Barbican produce the festival, working in partnership with the London Borough of Waltham Forest. We help foster connections between local partners, supporting their work to reach new audiences.

‘Surprised by just how many people and orgs are involved in film in Leytonstone. Brilliant to connect with them through this project. The Barbican was very organised, helpful and supportive.‘
Nuala O’Sullivan, Women Over Fifty Film Festival

If you’d like to get involved, visit our Leytonstone Loves Film website to find out more. You can also say hi and introduce yourself by emailing [email protected]. 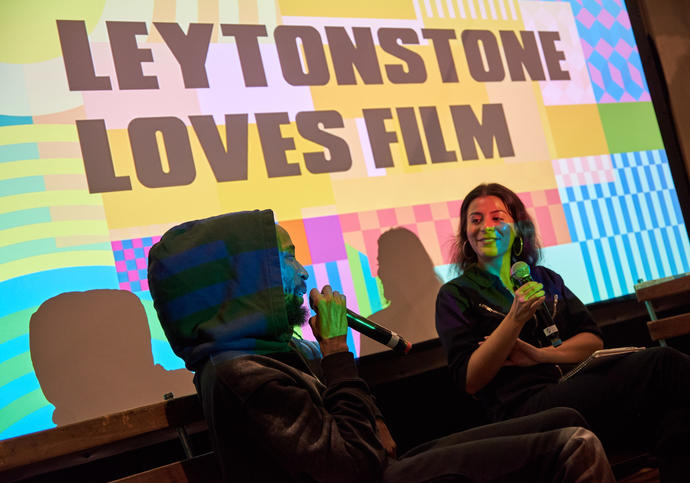 Inspired by the bold ideas and creativity of communities, we believe in working with our neighbours across east London, and learning together to develop inclusive and sustainable projects and networks.

Working year-round, Beyond Barbican builds relationships and connections with, and between, local partners, creating space for people with different skills, backgrounds and expertise to come together to realise creative projects in their neighbourhoods.